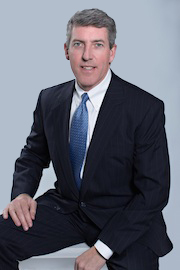 Robert A. O'Hare Jr. is a founding partner of O’Hare Parnagian LLP and head of the firm’s Litigation Practice Group. Robert began his highly successful legal career, spanning over 20 years, working on complex business and corporate litigation at top-tier national and international law firms. Today, he continues to litigate high stakes business matters. However, after forming O’Hare Parnagian in 1999, Robert began to represent people who were seriously injured or killed because of the wrongful conduct of others, mainly in response to requests by the firm’s clients and Robert’s colleagues in the wider legal profession. By applying his widely esteemed business acumen and commercial litigation skills to serious injury and wrongful death claims, Robert has recovered millions of dollars on behalf of injured people in New York.

In addition to Robert’s top-tier litigation experience and training, Robert brings a breadth of real world experience to his work on behalf of injured clients and their families. Before joining the legal profession, Robert served with the New York City Police Department as a police officer and sergeant. He was a member of New York City’s Emergency Medical Service and, for many years, an emergency medical technician for the largest volunteer ambulance service in New York. In these roles, Robert saw first-hand how injuries caused by the wrongful acts of others can change a person’s life forever. He also saw the true commitment that police officers and first responders make to the communities they serve, and developed a special admiration for these men and women of service. Robert is dedicated to using his experience and legal skills to help those injured in the line of duty obtain fair compensation for injuries caused by the wrongful or negligent acts of others.

Robert is a former chair of the Litigation Committee of the Bar Association of the City of New York, and a member of the New York State Trial Lawyers Association and American Association for Justice.

Member, The New York Guild of Catholic Lawyers, 2007 to present